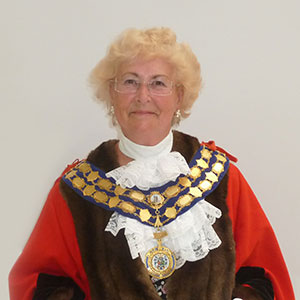 The Mayor has two important roles to fulfil: as a symbol of the Borough and as an expression of social cohesion.

The Mayor of the Council is the ‘First Citizen’ of the Borough and represents Castle Point Borough Council at various engagements during their term.  Within the Borough the Mayor takes precedence over everyone apart from a member of the Royal Family or the Lord Lieutenant.

The Mayor with her insignia and traditions of office acts as a figurehead and a symbol of continuity and has the prestigious role of representing the whole Borough during her year of office.  As its representative she can influence public perception and enhance the image of the Council.

While fulfilling the many engagements that fill the Mayor's diary, i.e. promoting charities and voluntary organisations, the business community and education.  The Mayor can act as a link between the various groups and organisations visited and has a unique overview of the needs and concerns of the community she serves.

The Mayor's role is purely ceremonial (non-political) they must be seen to represent every section of the community regardless of political persuasion. They may continue to carry out work in the ward they represent, but this must be in their role as a Councillor.  They are also able to take out to the community the message and aims of the Council.

Cllr Haunts will be supported in her role as Mayor by the Deputy Mayor, Cllr Mrs Jay Blissett, currently serving as Ward Member for Canvey Island West.  On the occasion when the Mayor is unable to attend an engagement due to previous commitments, The Deputy Mayor will attend on behalf of The Mayor.

If you would like to invite the Mayor to your local event, please complete the E-form ‘Request for the Mayor to attend an event’, available in the Mayoral Invitations tab below.